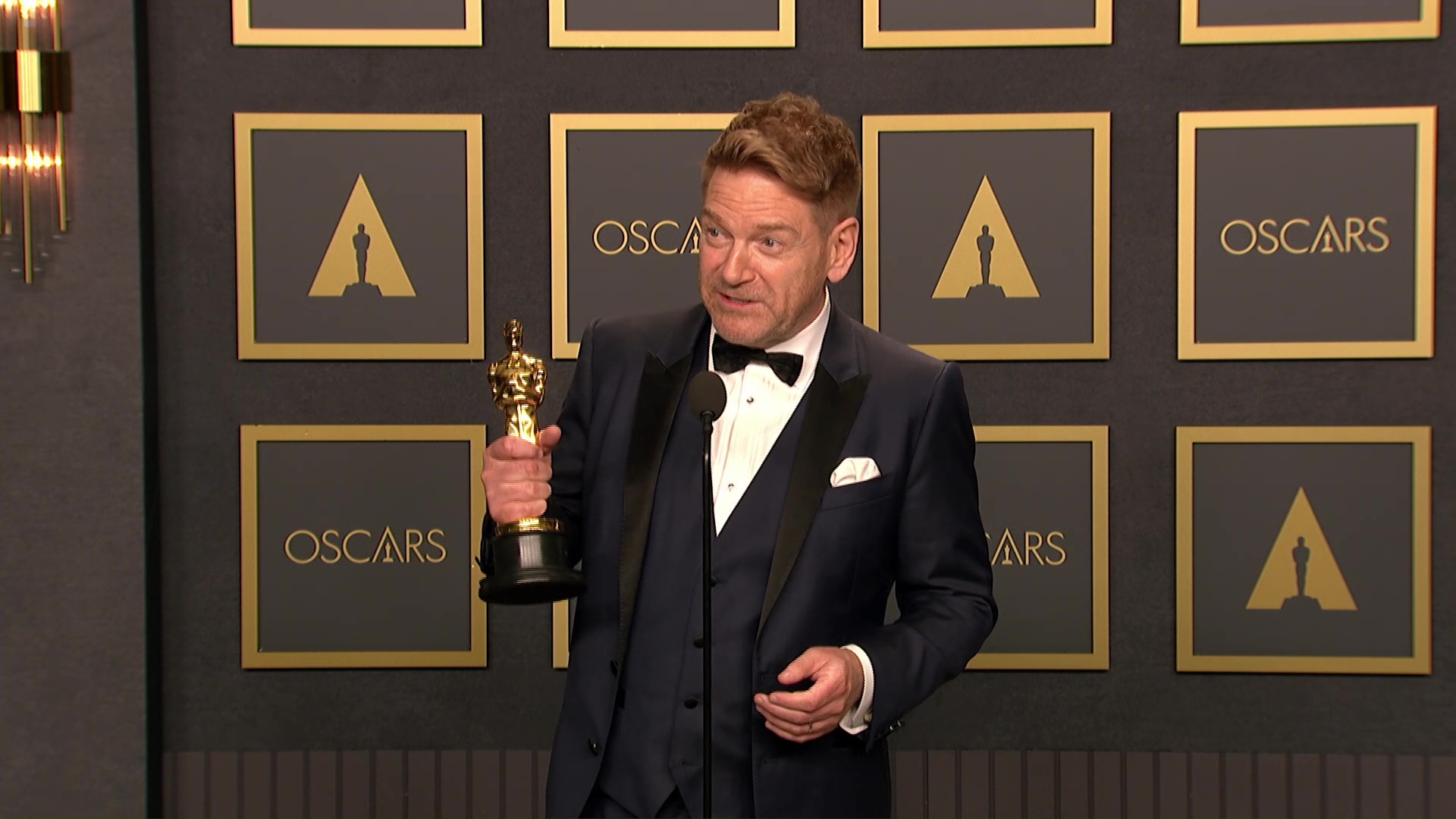 Q.    Congratulations!  I am not a critic, but I really love the

Q.    Can you talk about -- do you still have pains and emotions and

issues stemming from what you experienced as a child growing up

And, also, I wanted to ask you, were you a fan of the

A.    I have not seen Roma because when I first -- Alfonso Cuarón is

a master filmmaker.  When I knew it that it was a childhood

either, you know, influenced or stopped, frankly, because he is

a master, so I didn't want to see that.

The film is really about the beginnings of understanding how to

deal with the darkness of those days, which everybody had their

own experience of, and as a 9-year-old and with a family that

were trying to sort of shield us from it, it was to find as

much joy and humor quickly.  Typical of the Irish, even in the

had a very strong sense of who I was.  Making the film allowed

me to return to that.

My sister who is here tonight said, "This film has really outed

you, hasn't it, as a kind of a working-class Belfast boy."

come from.  And this was a way of not just acknowledging, but

embracing everything about it, the dark and the light.

for more years than I care to say.

that.  You were there in all the places lots of other people

weren't in, you know, fringe theatres and the Birmingham Rep

Studio when there's 100 people in.  And we had our first

preview of "Much Ado About Nothing."  And Judi Dench came

around after and said, "Watching you perform tonight is like

watching a slow-motion car wreck, Ken."  I said, "Do you think

People were kind enough to point out we were having ago.

white television projecting images of academy awards to this

great.  My family is here.  And that's a beautiful thing.  So

Q.    Will there be some cracks tonight, Ken?

A.    Yes, there will be because Jamie Dornan -- the only thing we

are going to really have to be careful about -- apologies in

advance if this happens.  If Jamie Dornan sees a microphone and

and if a fridge door opens, he is singing, Everlasting Love.

It's as simple as that.

Q.    I'm thrilled for you.  Congratulations!

Q.    We were back last fall when the movie premiered.  We were

talking about how this is the ultimate immigration movie and,

you know, that a family has to make a decision about leaving

their home and leaving their loved ones behind because there

was terror going on around them.  We didn't realize back in

November we would be in that exact situation now.

Have you thought about Belfast in terms of the Ukraine

and the people who have had to leave?

north of Ireland over the lifetime of my generation.  So from

very hard-earned very fragile piece which began with what we

are struggling to see at the moment, which is the very, very

difficult thing of trying to begin the process of

understanding, first of all listening to, people with whom you

profoundly disagree and finding a way to listen, understand,

respect and possibly accept on the road to progress.  It's

incredibly easy to say.  It is unbelievably hard to do.  And,

yet, that is where progress is made.

to do that.  And the example of the last 25 years as fragile as

it remains is still a shining light in the darkness.  And it's

impossible can be possible.  And it is -- it is unbelievably

difficult and unbelievably necessary and what I see across my

lifetime is an incredible effort made that has been worth it,

but please, God, situations in other parts of the world do not

cost that amount of time to come to the same painful

understanding that we need to talk, not fight.

I wanted to ask, it's a beautiful film about a memory.  You

a nominee for directing and acting.  Do you have any memories

from that night?  And have you thought about them at all this

wings and tapped me on the shoulder.  I turned around, and he

yourself, Mr. Nicholson."  That is what I remember.  I remember

being in the loo and sorting myself out, as it were, and

looking to the left and right.  And Steve Martin was here, and

Cuba Gooding, Jr. was there and realizing that it was an

evening like tonight has that surreal quality to it.  I've had

a lovely evening sitting next to Bradley Cooper, and we have

had a lovely chat.  I had a chance to see Mr. Ford Copolla, who

was a producer on our Frankenstein film 25 years ago.  The

camaraderie that these evenings produced in unusual is very

special.  So I remember that at that time, and I've had

versions of that already happening again tonight, and that has

Q.    I will say congratulations.

Q.    I was just wondering, how has it been to see young Jude Hill,

you know, winning an award, enjoying the process and the awards

season, and, you know, what can you say about him and the

performance of you and just how it was to work with him?

A.    He is a very special young fellow.  His parents are here

tonight, Darryl and Shauneen.  They've done an amazing job with

him and the two younger siblings.  They are a very, very nice

family.  They encourage their kids to be open, funny, ask

The single beef I have with him is, you know, he supports

Liverpool Football Club, and that meant directing him as an

actor who had to play a role in supporting the Tottenham

Hotspur Football Club was a challenge.  Although, I did say to

him tonight, "Listen, if I can do this, then surely Tottenham

Hotspur Football Club can be fourth place this season place and

be in Europe next.  He disagreed with me, but I am backing me.