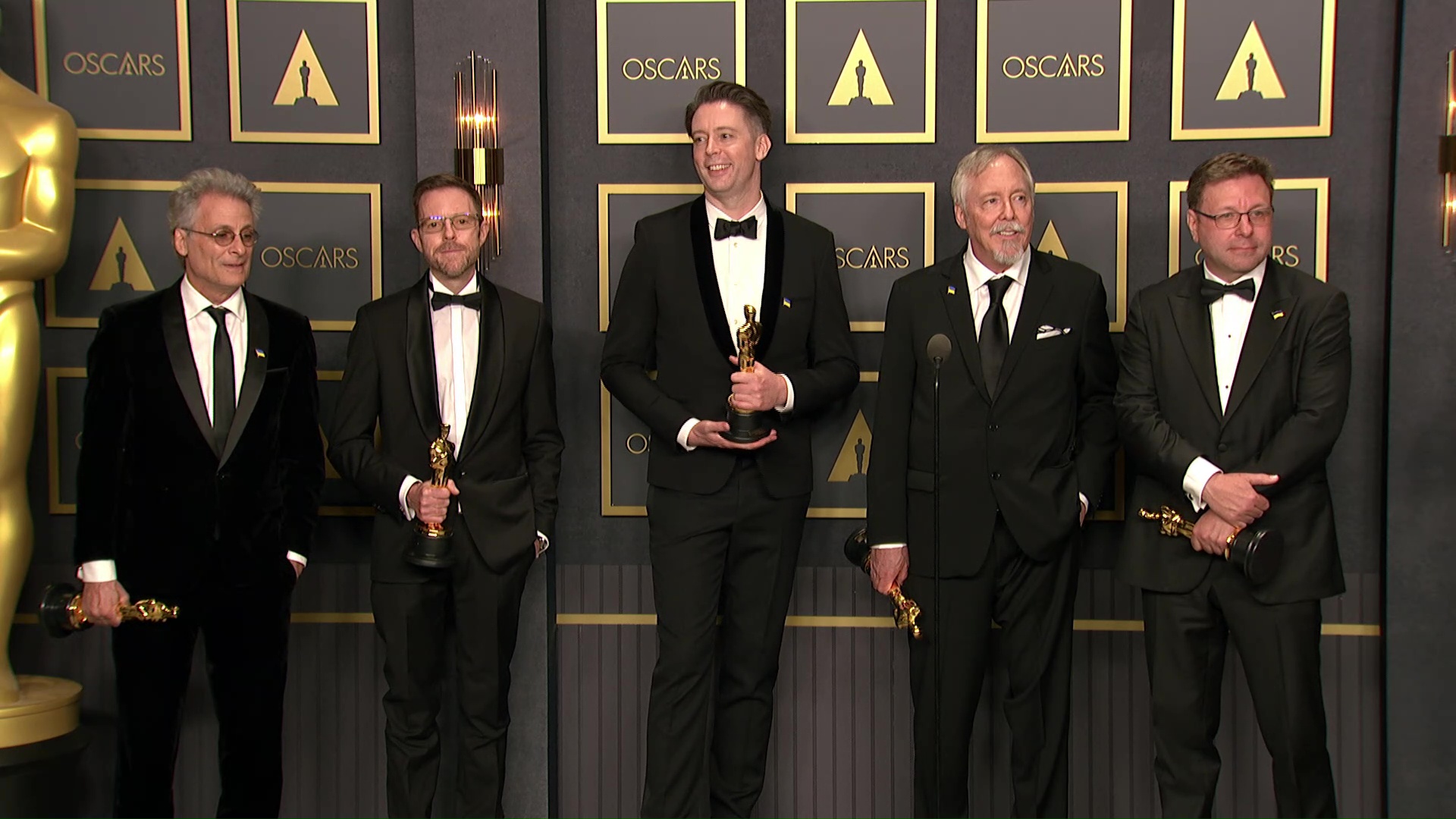 Q.    (Indiscernible audio) -- but with the other departments to

bring this novel fully forth on the screen?

A.    (THEO GREEN) I think that was an amazing effort between --

especially between Mark and Theo to create all these great

sounds for the film, and to really find the voice of the movie,

no pun intended. But it's really Denis' vision who really

studied the book, and a lot of us read the book as kids and

outstanding, and it's all thanks to Denis.

A.    (THEO GREEN) yeah. We have a director who really believes in

collaborative editing, and I was so happy to see Joe Walker win

because he's one of the central figures that works with Denis

to pass the ideas between us and sound and VFX. He is kind of

the clearing house, as it were, for all of the ideas that we

He and Denis sit there, we feed things into Joe Walker's edit,

he passes those to the VFX guys, and that's how we ended up

having a tight collaboration on this. All Denis' idea.

A.    (MARK MANGINI) one of the things that makes this collaboration

with Denis so unique is that, traditionally, sound is meant as

after the film is shot.

But Denis is a very progressive and forward-thinking director,

team and Joe and with Hans, and we are designing sounds early

much more proactive, and that's a modern and intelligent way to

Did you have a chance to see the ceremony, how -- how

your award was announced?

Q.    Great. How do you all think that whole situation was handled?

to honor the film and honor Denis, and that's all we want to do

tonight.  We are not here to get into that sort of stuff.  That

is, I believe, something for later.

I wanted to ask you, what did you feel was the -- was

there one singular challenge in this film that maybe was

different than other films you've been on?

you guys, jump in on this one.

fiction uses sound in a way that is designed to compliment

things you've never seen before, with, arguably, things you

maybe have never heard before.

Denis' mandate was make this a universe that sounds familiar.

that you felt as though you were, in effect, hearing a

documentary, as if you put out a boom pole and captured the

sounds of worms and ornithopters and shields and all the

fantastical things that we had to make.

All of them were made, believe it or not, out of traditional

or synthetic sound in this film, so much so that, of the 3200

individually created design sounds that are unique to our film,

only about four or five of them are actually derived from

first win.  Would you just describe what it feels like right

now and what this award means to you?

course, every nomination is really special. But to do this for

Denis is so close to my heart, I can't tell you. He is such a

wonderful human and such a great artist of how he makes films.

working with, and I can't tell you what it means to be able to

support him and bring this guy home in support of him.

A.    (THEO GREEN) I was very confused when Denis Villeneuve was not

nominated for directing. It's as if the film directed itself

and all of these cross categories magically did great work.

Seeing the sweep that Dune is having tonight makes me very

proud for Denis. But I know that he's proud that we've won

Q.    Hello. My name is Thomas Vuscala [phonetic] from the Slovac

It is amazing what you have achieved by sound.  I

really enjoyed it. What would you say to young sound designers

who are watching you today and be inspired by you? So I wanted

to ask what would you say to them, for the future sound

designers of our nation?

A.    (THEO GREEN) One very simple thing I would say is that sound

your pockets. I mean, really, you need a computer and a

So for me, that was one of the reasons that I got started in

sound design. I would have loved to do all kinds of things in

film, but sound presented an opportunity to create work with a

name is Tion, and my last name is [indiscernible] from the U.S.

Press Corps.  I'm a journalist.  And first of all, I would say

congratulations on your Oscar award tonight.

And I have one question for you. I just want to know,

like, is it a great feeling?  Do you feel excited right now?

A.    (DOUG HEMPHILL) I will say this is as much for our fans as for

anybody, and this puppy is going to my daughter's house. She is

the book. There's so many rabid fans out there, and we've had a

great response from them, and we really did this for them as

well as Denis, who really stuck close to the book. And that's

really what it meant. It was so fantastic.  Thank you.

Theo, I want to ask you, what sound are you most proud

of for creating in the movie?

And, for all of you, are you going to be back for Dune

2? I know some of the crew have said that they would be back.

Are any of you coming back for Dune 2?

(THEO GREEN) I laughed at the last part, but yeah. Obviously, we

would love to complete the story.  So yes. I hope so.

longest in gestation. I think it's the sound of the voice. For

me, that's something which was always going to be the hardest

effectsy, not to make it electronic, but to somehow feel as if

you've got inside someone's head for a moment.

That's the one I think I'm the happiest with. Although, I have

to say, I don't think the voice actually occurs very much in

part 2. So maybe we're spent with that idea already.

It took all of us, and Denis and Joe was a big part of that. It

was really a collective effort that made that sound work for

the voice and to tell that story. And it was -- it was really,

like, feeding off of each other in such a creative way that I

have not seen any movie, really, to that degree. So this is a

special group, and I am just honored to be part of that.