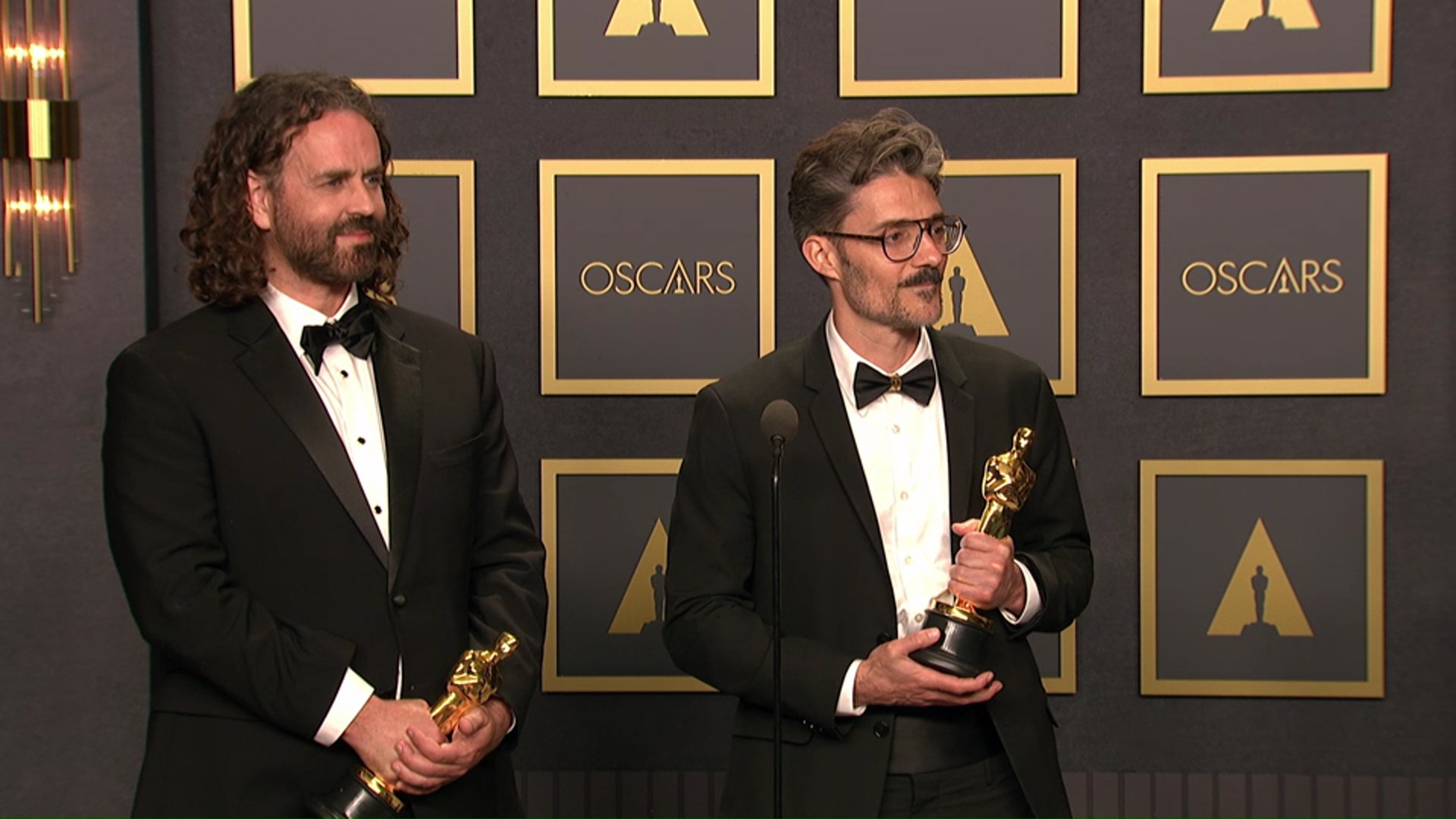 is wonderful.  Tell me -- I mean, we were all waiting for this.

Tell me how it felt when you got the award and all that.

A.    (Alberto Mielgo) Well, the first impression, it was incredible

because the theatre feels very small and intimate.  So we were

really feeling, wow, we could see absolutely everybody, and it

was extremely a lot of pressure because it feels like people

are very close.  And then when they say the name of the film,

time.  So I was alone without knowing what to do a little bit.

And I'm going to start saying around, "Sorry, sorry," I didn't

know what to say until Leo came.

probably could describe it even better, but, yeah, it was

surreal, man.  It was just ace.  It was, yeah, extremely,

extremely special, and the time, just the defining of time was

the awards, you always dream with this.  And then when it's

real and it happens, it is -- it's absolutely absurd.

Q.    You mentioned in your speech that you are hoping that this

opens up a little bit the world of animation throughout.

bit more of that concept?  And, you know, how do you feel

about -- how can you impose that when brands like Disney and

Disney is not for me, I suppose.  We had a number of

conversations.  And very much sometimes, these big networks

that they are doing very good what they do.  Nobody is better

at Disney doing Disney.  I don't see a little bit of our

relationship there because right now I'm not open to do that.

And I -- obviously, I don't want to stop what all the other

companies are doing because, A, it's beautiful.  I've been a

kid myself, and I enjoy animation a lot.  And, also, it's very

successful and it still is successful.

But recently, especially since we release LOVE, DEATH & ROBOTS,

we open a wide range of possibilities with this art of

animation, so it is happening.  The Academy nominated these

which is major.  And I think that there is way much more things

to come.  Conversations that I'm having now, they were not

happening three years ago.  So it's kind of like a golden time

for animation 100 percent, and this is obviously going to --

sorry -- this is going to help a lot.

a little bit to a person who doesn't understand this industry

in Spain, which opportunities, like, is going to bring you,

to Spain or leave it here?  What are you going to do?

have actually a number of awards, and that's always a problem

because they come in a box, they are big, and it's kind of,

like, I don't know where to have them; either in L.A. or in

Spain.  The Oscar is, obviously, like, key for a lot of things,

right direction.  As I say, it's been happening for the last

years, especially since we kind of, like, did something way

extreme with LOVE, DEATH, & ROBOTS that people is paying way

more attention with adult animation.  And just to put an

example, five years ago, perhaps when I was pitching my

projects, they were, like, no, you are crazy, dude.  We cannot

or sex or nudity.  While now, they are extremely open.  They

that we can do.  They want to see interesting stories, and we

can target audiences.  So there is money for that, which is

great, and five years ago it was not a chance at all.

Q.    Can you guys talk a little bit about the content of the movie

but -- well, what's the story point?  And it's interesting

geography, right?  There is, like, in different countries.  And

so do you have that idea?  And then how do you expand it and to

today, and love back in the time was very useful to create the

strong families, the strong clans.  By the time your kids are

So by the time that your kids are nine, you toss them into,

like, okay, start working in the fields and, you know, make

like, strong family so you can actually be powerful.

Nowadays, we are way more centralized, and we focus way more in

ourselves.  But in the time, the relationships, they were very

much based on faith and family, a lot of pressure, commitment.

I don't know if back in the time people were happier.  I don't

know if we are happier now.  So I wanted to talk about what is

the time.  And I wanted to do it -- answering to your

question -- internationally because I think that it speaks to a

lot of countries, and it speaks to a lot of different people

that they live this very same society that we are living now.

languages are acceptable.  (In Spanish.)

God right now.  This project took quite a few years to put

together.  Please tell us what you both learned from making

this for so many years, and thank God you did, but what did you

both learn as filmmakers during this adventure?

A.    (Alberto Mielgo)  We learned that animation is obviously

extremely difficult, tough, and expensive.  We learned that

being independent is not a reason to not do things.  We arrived

here, and we basically self-finance and put a lot of effort,

and then we learned that obviously the teams are big, and you

need to deal with people.  The question is very difficult.  We

but also we learned from our goals.  There are a lot of things

that we did right that we will definitely repeat it.

just, like, I'll say that before, but taking Alberto's vision

and his style, and I think that was, to me, one of the, you

the first images coming through, you know.  I'm thinking that

this is -- this is looking the right way, and, you know, we

could make a difference, and I thought that was pretty good.

think your short is really a work of art.  I just wanted to ask

to the -- your category being awarded preshow?

A.    (Alberto Mielgo)  Preshow.  We were surprisingly happy.  I

mean, look, let's be fair.  At first we were all extremely, you

know, it was, like, an indignation, but then one day after the

award kind of came up, and it felt a little bit frivolous to

protest a little bit because things are really tough over

there, but then I think that they handle it well.  I understand

that extra minutes count.  It was very nice to see the whole

theatre full.  We didn't know if this was, like, an empty

theatre experience, but it was really nice to see it full.  And

then, well, they did a little bit of an edit of our words, and

I mean, I understand how it happened.  I hope that this is the

last year that they do that.  I hope that the Academy decides

rather than the TV network.  I think that it's nice that the

show can be perfectly 30 minutes longer.  Why not?  A lot of

people like that, and I don't think it's going to take longer

than that.  So I really hope for the love and the sake of all

the categories that are here, that they don't do that because

it's not how it looks, it's not about your star moment.  It's

how you make it look outside.  A lot of the press, they got

confused as well.  Nobody knew if it would be on TV or not.  A

lot of my friends, they are not even watching this because they

thought they were out, and so it created a little bit of harm

on that since that it was not nice.  Thank you.