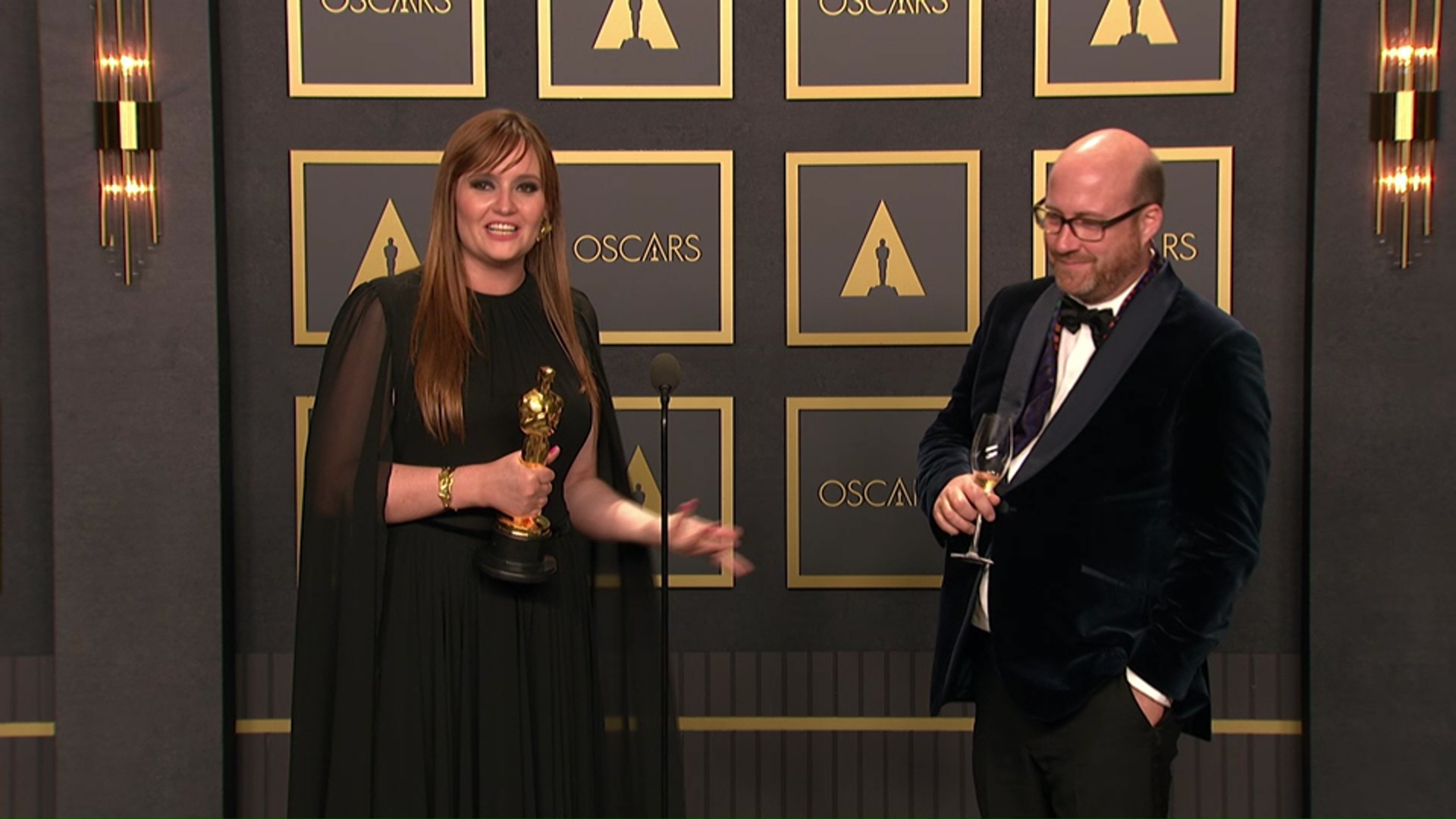 Congratulations for this statute.

Q.    And, if I asked you what this prize mean to you today and if

you are -- and if you have special thought to someone, what

A.    (Patrice Vermette) Well, I know exactly what you're talking

about because my best friend passed away on Christmas day.  And

I would say, "Jean-Marc, thank you because you believed in me

would be here today to see this because we're best buddies.

And what was the other question?

like watching the Oscars with my parents.  I was -- ever since

I can remember, like, Oscar Sunday was extremely important in

our household.  And I was, like -- it was coming from Montreal.

It was something that -- it was totally unattainable.  It was

just the holy grail of cinema.  It was just -- and to be here

talented people who believe in me.  And I had great teams who

But yeah, it's -- I still don't believe that I'm going to have

this at my house.

Probably my wife will be doing her exercise, morning exercises

it's quite incredible.  [FOREIGN LANGUAGE].

Q.    I would like to ask you as a Canadian, how do you feel about

the Canadian community that is in Hollywood?  We don't have

Hollywood in Canada.  You know that.  How do you feel about the

think -- I think that is an amazing gift that our communities

have.  Both countries like Hungary and Canada doesn't have the

same budget as we do -- as in the United States.  And we are

trained to work with very little, work on shoestring budgets.

such a big production, I think it pays off.  And I think that's

And, actually, also, I just finished working on a movie in

Australia.  And we're working with a Hungarian DP.  And, again,

that guy, I was looking at him work.  And the tricks that he

working on shoestring budgets.  And, then, he creates amazing

images.  So I think it is a tribute to working with nothing and

This is a huge recognition for the Hungarian film industry and

you feel now?  Are you going to be back for DUNE 2?  And what

was the greatest challenge of designing for DUNE?

A.    (Zsuzsanna Sipos)  I feel surreal.  It's really unbelievable.

And I don't remember the third question.  Sorry.  What is the

question is for both of you.

What were some of your favorite sets or scenes to work

A.    (Patrice Vermette)  All of them.  But I think the favorite

thing was to -- it was a challenge to create different worlds

And the challenge was two things.

First one was it's a cherished book by Denis Villeneuve, our

leader, who taught us that fear is a mind killer.  And he

encouraged us to dream.  So dreaming about those three planets

was an amazing journey.

And the most interesting things I -- the most challenging thing

and, also, at the same time to be aware that there's a huge fan

base of -- of the book of Frank Herbert's writings.  So we

at us when the movie was released.  And, yeah, that's kind of a

challenge on designing for Dune, what was that?

question to answer.  I mean, I really enjoyed all of it.  And

there were challenges in it, but all of them were, you know,

good.  So they didn't really stress.  I mean, we had a bit of

stress throughout the show, but it was really -- I really

enjoyed it.  I can say that it was one of my best experience

A.    (Patrice Vermette)  It's funny because it was such a

collaborative effort between all departments.  It was very

A.    (Patrice Vermette)  And it was -- being collaborative.

Everybody had their doors open.  So when we needed the other

department, we had questions -- it was quite an extraordinary

experience.  Just on that level of collaboration between VFX,

cinematography, costumes, hair and makeup, the Baron, and the

suit.  And how to make everything fit together, it was -- it

was kind of a no-ego show.

their best experiences.  This was a great show to do.  I

How do you feel now that you won BAFTA, the Critics

Choice.  The -- I think you won one more, the production

designer awards you won and now the Oscars.

to be in the staff of the many talented Hungarians.  I mean,

there were many from Hungary who established -- basically,

established in studios here in Hollywood, like, George Forenzo

And, you know, I hope it will open doors for many people who

don't believe that they can achieve what I have achieved.  But

Q.    Hi, I know that Egyptian pyramids is one of the influences,

perhaps.  I would like to know how it is more than just

architectural, but also steeped in symbolism as well.  And if

you can be specific.

A.    (Patrice Vermette)  You mean about the Egyptian pyramids or --

there was a lot of influence in the design of DUNE.  And the

first influence came from the book.  Because Frank Herbert

So the design of the movie was, basically, a response to the

elements and the realities of that planet as -- you know,

obviously, the pyramid is angular, but there is -- there is

There was -- the influence that I had was Ziggurat

was also Brutalism architecture, but mostly Brutalism from

South America from Brazil.  And all of that was to respond to

the book first of all.

We are talking about Colonialism in a foreign planet.

of force.  So that's where the Brutalism influence came from.

That's why the size and scale of all sets came from.  And the

angularity because of the wind, you would never build anything

straight on that planet.  Everything should sweep over the

buildings and, you know, so -- so there was a lot of

architectural influence for the size of the walls.  But, yes,

Egyptian architecture was part of it.