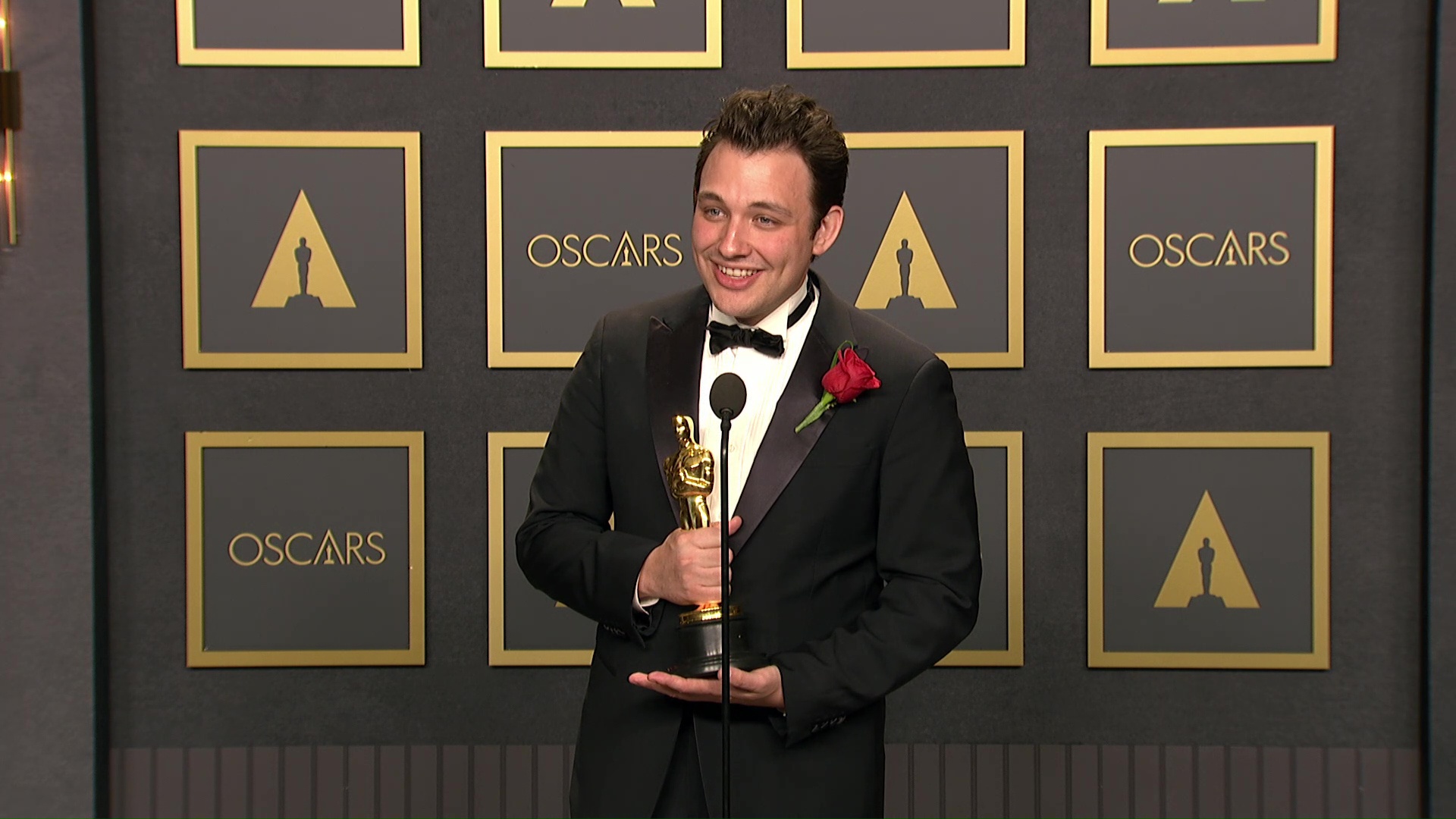 FILM: "The Queen of Basketball"

Q.    Hi.  In your acceptance speech you were talking about how this

is a big moment for female athletes and movies.  Can you talk a

little bit more about that?

A.    Yeah.  So our film, THE QUEEN OF BASKETBALL, is about Lucy

Harris who is a pioneer of the game of basketball.  She was the

first and only woman to officially be drafted into the NBA.

enshrined in the Basketball Hall of Fame.  She led the

scored the first basket in Olympic history, and her story was

And I think this win shows, not only that Lucy Harris, her

story means something profound to America and to the world, and

I think it speaks to the fact that any naysayer who says, you

know, it's the -- female athletes don't deserve the world

stage, I hope this helps contribute to changing that and ending

this disparity and closing the gap in terms of compensation, in

terms of exposure, that the female athletes get in comparison

Q.    Two-part question:  One, what was it like having executives

producer like Shaquille O'Neal and Steph Curry be a part of

this project, and then also how does this help bring more

awareness to the WNBA as far as women's athletics is concerned?

working with Steph.  Their entire teams are fantastic, and for

capital to tell this story, get it out there, and lift Lucy on

out about her story and paying attention to the history of

I don't know what effect it will have on the WNBA, but I hope

it makes people pay attention that every player on that court,

every WNBA player has a study, just like Lucy had a story.  And

that's really what makes any game or any story interesting to

watch are the people, and I hope that people start paying

attention to people's stories because that's what makes it a

game, a sport, a story, a pleasure to watch is knowing who

And, yeah.  I hope -- I hope it makes the contribution that

Lucy would want to make and draw attention to those stories,

know that was something that was important to her.

Q.    Thank you for making this incredible short, and also for

letting Lucy tell her own story straight to the camera.  You

felt like you were in the room with her.

this Oscar mean for Lucy and for her family?  And thanks for

recognizing her family to be part of the story.

New York; and she loved it, and she was there with her family

and I know it meant a lot.

The last time I saw her, I was helping her into her car.  And

she gave me a big hug, and she whispered "Thank you" in my ear,

and it's hard not to think about that and not get emotional.

But I think, you know, Lucy's four children and their partners

knew how amazing of a story this was.  I think Lucy knew how

amazing of a story it was, and, you know, I'm a craft's person,

you know, I'm a story craft's person.  I'm a filmmaker.  And

honestly in the first ten minutes of interviewing Lucy, I said

to myself I just better not screw this up.  This is a really

You can watch the film for free on YouTube, probably one of the

very few Oscar-nominated films you can watch for free.  It is

20 minutes long on YouTube, very accessible, so I hope

everybody watches the story of Lucy Harris from her mouth.  I

know it means a lot to me and to her family.

Q.    Stephanie Holland from The Root.

Q.    Hi.  I'm wondering if you think that the success of your film

will encourage more stories to be told about the history of

of generations of women, and particularly women of color whose

story has not been told, whose stories have not been

celebrated.  And, you know, I think people are starting to get

lot of stories that they don't know.  Not that it didn't

happen.  It is that those stories haven't been told.  So, yes,

athletes and women athletes of color.  And I hope that they are

short documentaries, and I hope that they're free on YouTube so

everybody can see the story.

Q.    I wanted to ask, you were very outspoken on Twitter about the

Academy's decision to do the -- these eight categories before

the live broadcast.  Did you consider making a statement about

it tonight?  And, if so, why did you decide not to?

A.    It's about priorities.  This is Lucy Harris' Academy Award.

She told her story.  I helped her.  I gave her an assist, but

it's her story.  And, you know, details of how a television

award show are -- is produced can create a lot of grumpy

people, but at the end of the day, we didn't make the film for

that.  We made the film to honor Lucy Harris, and I was

squarely focused on that, and I will continue to be.  And I'll

also continue to voice my concerns on behalf of the short

documentary, that there's no perceived difference in

just because it's short, and I think Lucy Harris' family would

Q.    You are very strong bookends of the short film and clearly it

is working extremely well for you.  So what does that mean for

you and the short form and, in general, as a stepping-stone for

A.    Yeah, I'm committed to short documentaries.  You know, a lot of

people see short documentaries as a stepping-stone or a calling

I think the short documentary is the most democratic form of

cinema.  It has the lowest barrier of entry to finance and

make.  It has the lowest barrier of entry to the audience to

see it.  And I hope that short documentaries can become more

and more visible.  You know, five times as many hours spent

watching YouTube as Netflix.  So I'm hoping that people

are real movies that can change the world, and that can close

elisions in history forever like I think we've helped do here

A.    Virtual, okay.  In theory.  This is like Mission Control in

You did a phenomenal job documenting Lucy's unsung achievement

as one of the greatest basketball players of all time.  What

was the biggest challenge for you in telling her story?

spirit of the story that she told.  You know, she told her

entire life story over 11 hours.  And our job as a team of

filmmakers was to get that -- edit that story down into the

22 minutes that you saw.  And that's our job as filmmakers, as

documentary filmmakers is to try to find the essence of a

person, of a narrative, of a story, and that was the hardest

thing, you know, by far is what to pick, how to order it.  It

came together in the edit for us as so many documentaries do.

Q.    And we do have Florida Weekly back.

Q.    Oh, it's just beautiful weather here.  Please be sure to come

you think of making it longer?  And with a lot of other

short-doc filmmakers out there, can you encourage them where

they see their short docs and films most accepted, seen, and

of artists, my goal is elegance, you know, no extra pieces,

nothing redundant.  It's about making sure that there are --

there's nothing in there that doesn't advance the narrative or tell the story.

In terms of where you can see these films, I mean, for short

documentary filmmakers, you know, this is a New York Times Op

Doc.  They have, you know, commissioned and published close to

400 short documentaries over 10 years.  These films are on

YouTube.  They are on Vimeo, a Vimeo staff pick started my

career.  Short of the Week.  I mean, this is an internet

medium.  That's what is interesting here is that the internet

has transformed cinema, and it's happening through short

documentaries because that's the appropriate length of time

that you want to see.

You'll also notice, you know, in the film Lucy's face.  You are

close on Lucy's face.  The reason we did that is because most

people watch our film on their phone.  And I think short

documentary is the door through which the internet will truly

transform and democratize advertise cinema.  That's why the

short documentary will be the youngest, the most diverse, the

Q.    Thank you so much and congratulations.