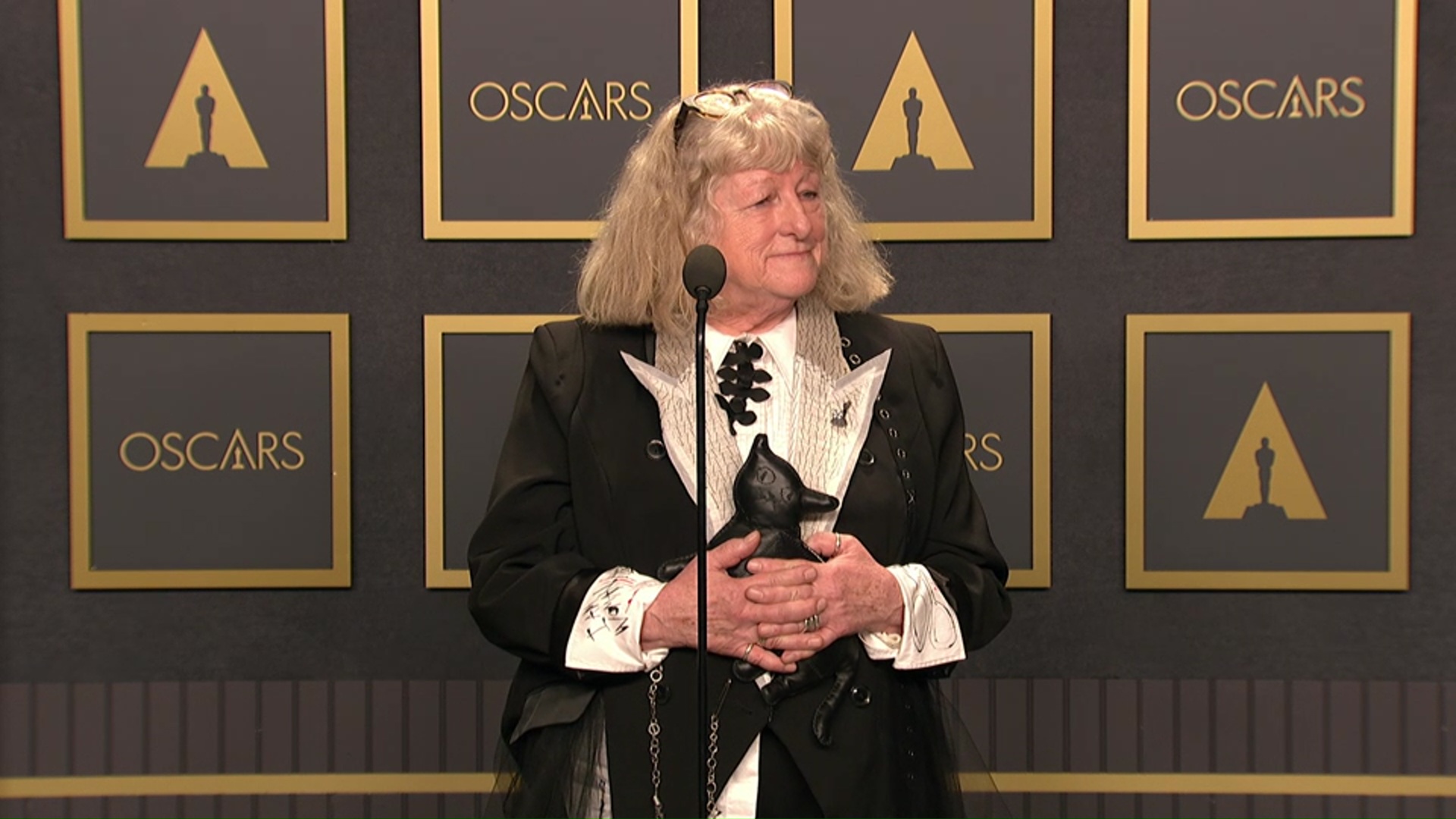 in Australia, for heaven's sake, making some movie.

So I came up, and I go back on Tuesday. I was allowed out for

Q.    So tell me about creating movie designs, you know, what was

your inspiration?  Sure, the books and comics and all that

stuff, but what was the crux of it?

A.    (JENNY BEAVAN) The script, because that's where I always start

from, the storytelling from the script.  And there was -- a lot

of the looks were in the script, not what they'd looked like,

but the fact they would happen, like the trash dress and --

perhaps '77 was probably my hay day of actually buying clothes

and having a relatively good figure and going to places like

Viva and knowing about Vivian West, which -- although I

But I was quite, you know, around. So I had a real memory of

that time, which was lovely, especially when I could see all of

my supporting artists dressed.  And I suddenly thought, I

actually am back there. They were so brilliantly done.

a way. She starts as, obviously, a very creative and rebellious

small child who then becomes this extraordinary designer and

then become someone who could, possibly, in 25 years, be Glenn

Close. That was my sort of thought.

It wasn't like we were actually going to do an antipal

[phonetic] look, but there was a sort of chance that you could

go off in that direction, if they wanted to.

the red, white, and black. And I was just curious if there was

any specific, you know, costuming details or any nods or

references that viewers may or may not have missed that you

were able to sneak into the costuming for either Emma's

character, either of the Emmas.

A.    (JENNY BEAVAN) Well, I think I tried to give her a consistent

look and make sure that the work she did in her atelier, her

warehouse, her workshop, was very much still in the style of

the House of Baroness, because I think an audience feels safer,

and they just believe it, then, far more.

So her look, sort of developed out of fittings, and the

asymmetric thing came out of just, I think, the very early

fittings, when Jane Lord -- who is an amazing costume maker,

who did all her clothes.  So it was very much just her, her

And when we went symmetric on something, we thought, that's

her, isn't it. And then it was almost easy.  If you use really

sculptural fabric, something quite thick to drape. And the

quite a clear story.

So it was the fun of finding all the stuff.  And some of it is

real vintage, and some of it is -- we made, or, obviously, we

made loads of it. But there is some bits of my memories of

Q.    Congratulations, what a wonderful film.  And the color palette,

it's always the red, the black, and the white, but you use

other colors to really make it very modern. How was that

make my notes, I look at a huge amount of research, and, out of

that, just comes an instinct for where it should go. I mean,

obviously, I was working with Craig, with Nadia, with Fiona

Crombie, so we are all on the same page with the looks.

But the colors just seem to be right for Cruella.  Like, the

red dress, when she burns off the white cape, it's the obvious

Q.    I wonder if you can talk about how dramatic the shift is to go

from Cruella -- there's a couple of films in between, but to go

from Cruella to Furiosa?

job to another, and they have been so different, which is

actually the joy of the job.  And I read the Sydney Morning

Herald. Mind you [indiscernible] to England, you know, before I

came up, so I had a sort of feeling for Australia.

But, I mean, it's great.  And, obviously, I've worked on Mad

Max Fury Road, so I know the dynamic, and I know George, and I

know our wonderful work crew. But, you know, that's what I do.

Q.    Congratulations. You made some really incredible remarks last

June around the release of this film about costume designers

to the inspiration for your costumes and how they trickle down

I'm curious if you've had any substantive conversations

with your representatives, with your guild, about how to change

this for the many costumers, many of them are women.  And also

here we have:  "Naked without you," which is the girl's, you know, thing.

Yes, I did.  And I had a bit of interplay with Disney, with

Alan Bergman, and Alan Hahn, who I know and who are very kind,

and I have kept it very, very polite.  And I have been really

waiting to see how I can help in the most positive way, I mean,

with everything that's going on.

I was shocked by what happened to me. I felt -- I have never

felt so disrespected and realized a huge amount of things that

I'd never thought about, because I'd always just done the job

and puddled home and, I don't know, played with the cat, gone

out to garden, whatever.

And suddenly, I realized there was this wealth of inequality

my idea and my thoughts, and, suddenly, they own it, and it

right time to be political, with everything that's going on in

the world, and it's far worse things happening in, obviously,

Ukraine and so many things. It is bad, what's happening.

But yes.  It has not gone away. I think they may have thought

it's gone away, but it hasn't.

Q.    And I want to congratulate you on the grand slam you just won.

Q.    How does it feel to have won BAFTA and the Oscars?

thrilled for my team because it absolutely cements the fact

that they were the best in the world, and what they did and did

for me and did for the film was extraordinary. And so -- you

know, their sheer creativity and generosity in what they -- the

ideas they produced, and their blooming skill.

which Clare Sprite got the extraordinary team together, and she

is my plus-one tonight.  But it really is absolutely wonderful

for them.  Hopefully, they realize, you know, it is them, not

Q.    Thank you so very much, and a huge, big congratulations to you.

Q.    Congratulations. Thank you so much. My name is Sheila.  I am

with WIE:  Women in Entertainment.  I love your work. I just

want to know, what inspires you?

director and a good actor, obviously, is fantastic. But, you

know, if it is a really good story and you can get your teeth

variety of what I do.  So I find that pretty inspiring.

But I think I'm moving slowly into a slightly more educational

world, perhaps. I do rather enjoy lecturing and talking about

what I do. So that might sort of -- I find that quite

inspirational, and I'm working with students and young people,

And I probably wouldn't stop designing, and I do have a

mortgage to pay for the next four years.  Let's get that real.

But it is interesting how you -- how you change.

Q.    So how well do you think the Academy pulled off blending the

non-televised categories into the broadcast, and what do you

think about the decision overall?

obviously, because I could see them blending it -- it was much,

much better than I'd feared, and I certainly signed the -- the

thing that we all said, you know, we didn't feel it was right

and we felt it was very disrespectful.

for next year, though. I think it felt a little bit cheating on

the people, because there's something lovely about the three

presenter -- I mean, they were traffic, those two presenters.

I thought they were wonderful, Jason Momoa and -- actually, I

have completely forgotten who the other one was, but they were

through this. Although it was funny and they said -- but then

the minute the actual women came on, Amy Schumer and those --

it just went into a different world, I thought. That's my

feelings on the matter, but I -- it is not for me to say.

of, if they need to shorten the show, shortening it. But not

possibly that many. I thought that it was crafts, so there was

pretty serious crafts in there. Anyway, that's my thought.

Q.    Thank you so much, and congratulations.