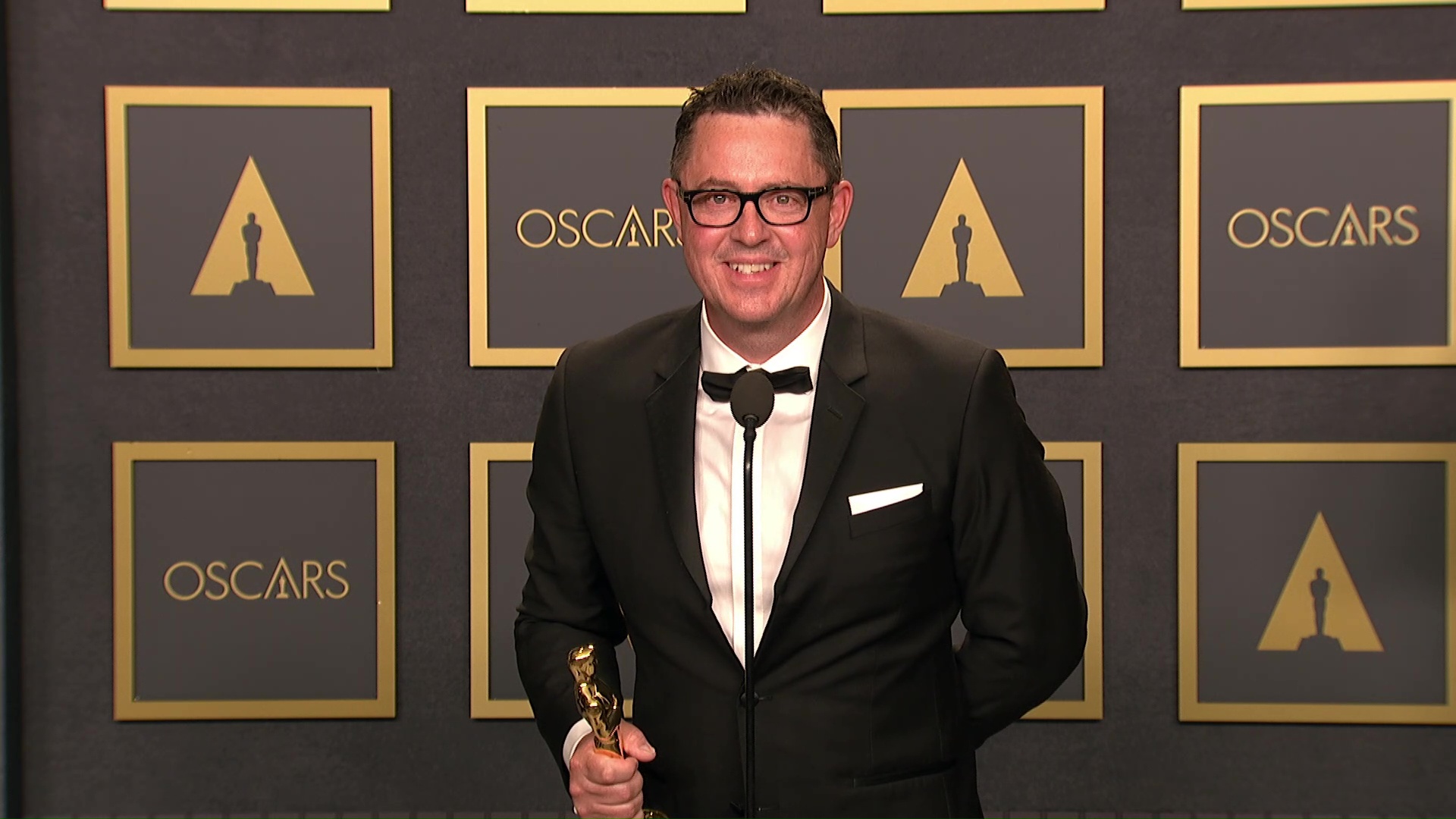 A.    That man is the most humble talented person that I've ever met

in entire my life.  Denis Villeneuve is a man who trusts his

collaborators.  Feels that he has the right instincts to pursue

You know, DUNE is a tough story to make.  And, you know, I was

at the effects crew.  It is, like, Denis is the man.  Every

article, everything that gets written about DUNE must start

Q.    But, hey, so here we are getting to talk just a couple of weeks

later after our Batman chat.  We left that with you going back

to the second part of DUNE.  And what is going to be different?

interval from part one to part two?  What will be changed?

What will be the same with this great collaboration you have

with Denis and the other crafts people?

not give you any scoops.  So I won't tell you anything beyond

read the script.  And I'm more blown away by this script than I

was by part one.  I am more excited.  In fact, I was sitting at

a meeting with Denis and Patrice and Paul at Denis' house

talking about this film.

And I turned to Denis and said, "I can't believe these people

pay us to do this.  Like, this is ridiculous.  They pay us to

make these movies, which are so exciting and so amazing."

So I can tell you it's bigger and better and amazing.  So I

apologize for not giving you more than that.

Q.    This is Carolyn from Hollywood Record.

Q.    You talked about Denis.  Would you also extend that and talk

about your collaborators tonight who have also been recognized

by Oscars?  Would you talk about just the collaboration and,

also, supporting each other tonight?

A.    I mean, this is the most talented bunch of collaborators I've

ever worked with.  And, you know, every single time I get

together with these people, I'm always at the back of the room

looking at them going.  I am so honored and humbled and proud

to be in the same room with these people.

I mean, Patrice's work.  I mean, I don't know if everyone's

seen Patrice's work or Denis on arrival, but it's insanely

amazing.  And to be inserted into that, I feel very humbled.  I

can't think of a better word.  I wish I could, but I feel

humbled.  You know, like, I've shot with some amazing directors

before.  And I still feel very lucky to have learned from the

But this film, also, was a step forward for me as an artist.

You know, I feel like there's so much to learn from Patrice and

from Paul, who you'll get to speak to soon.  You know, Paul and

This is the thing, like, this is what filmmaking is when it's

a sum of its part.  And this is why I got involved with

filmmaking in the first place.

It wasn't to hold up an Oscar for cinematography, which will

is to make a film.  It is better than cinematography by itself.

It's better than the VFX by itself.

We are the culmination of the Denis Villeneuve's combined group

effort to make a movie.  And that's what I'm most proud of.

I know 45 seconds in an acceptance speech isn't a lot

of time, so would you like to take a minute now to thank some

of the folks from your team that helped you get here?

lay their names out in a written word.  If I try and do it now,

I am sure to screw it up.  I will mispronunciate.  Like, my

crew is everything to me.  I can't do anything without them.

They make up my deficiencies.  So they are fantastic.

I wish that they could be here with me tonight.  I wish we

could celebrate all of those people, but, unfortunately, I'm

the figure head.  I'm the unlucky bugger that gets to stand up

here and hold this.  A loss for them.  So if we can read their

names when I publish them that would be fantastic.

My collaborators Carolyn Lafaye [phonetic].  They are the

that starts with this word, "Denis," and not with the word,

Q.    And we are all so excited for you.  Just announced it on the

telly.  And the whole crew burst into applause.  So well done.

Batman -- that's just some of your resume.  Right?  What is it

A.    Australians are very resilient.  You know, it's something that

Australians kind of don't realize they are until they leave, you

And Australians are very resilient.  And we are quite good at

making do with not a lot.  And that, particularly, goes to the

film industry in Australia.  You know, we come up with some

amazing stories.  Some of the best in the world.  And we have

some of the best talents in the world.

And, like, if we can train in Australia, we can come to bigger

budgeted films in London or America or Europe.  And we can kind

of shine.  And that is pretty evident this year, particularly,

in cinematography.  You know, you have Ari Wegner who, as you

of her success.  And to have Australians being represented the

way that they are outside of the traditional acting and, you

know, directing categories means a lot to me.

Congratulations, by the way.

This movie has an incredible -- I mean, the visuals are

just breathtaking.  And it is just a massive undertaking so

what was the most challenging thing about making this movie.

You know, the cinematography is just so incredible.

challenges.  It's not that every challenge was little, but

thousands of medium to large challenges.  So every challenge

seemed more insurmountable than the last.

It is such a big story.  You know, ultimately, this film is a

story about character.  So if you're standing there with a

character with the camera and the actor is right, the script is

right, the director is right, then, you can't help but film

something that is magical.  So that's what I feel like we did

was challenging.  But, ultimately, this was a film made good by

its collaborators and by its artisans.

You know, like we -- we got through, and we made a film that

Q.    Joel McGovern from the Wrap?

But you mentioned just now Ari Wegner.  Your country

person and your co-nominee, fellow nominee.

Are you seeing maybe a change in the industry in terms

of women cinematographers and opportunities for women.  It's

such a long boys club historically, but are you noticing a

A.    I'm glad you asked about that because, yes, there is a massive

ground swell of interest of other voices that are occurring in

the industry, generally.  And that has filtered its way down to

You know, there's been a lot of talk about actors and actresses

and directors that are minorities or people that

underrepresented.  But cinematography has a long lead-up time.

Like, to learn how to be a cinematographer, it takes time.  And

you don't just come out suddenly as a cinematographer.  You

need to learn your craft.  And because of that it means, that

we are looking at the world almost in reverse.  We're looking

So I'm feeling at this point in 2022, we are starting the

process or beginning the process to continue for

underrepresented people, women, minorities to be able to kind

of have a voice in the cinematography world.

what is going to be happening in cinematography-wise in 2032.

When you -- so do you have any thoughts on the

academy's decision not to televise the presenting of some of

the awards, including your DUNE collaborators on the sound

A.    How long do you have?  Seriously.  Because I could talk to you

I mean, listen, I will say this, that 45 minutes that we did

that was so much fun.  And do you know why it is fun because it

was a bit more informal.  That is why it is fun.  But it is

tricky, you know.  And I don't mean we balance economics with

the award shows, but films are made by, you know, the sound

recorders, by visual effects supervisors, by the editors, by

the productions designers.  That's how films are made.  And it

seems odd to have some random relegation.  Everybody in this

crowd realizes and understands why this happens.  Like, we're

not silly.  And we understand the economics.  But at the same

time, it is up to us, I think to change the economics, to

change the fact that, you know, we want to encourage kids who

are watching these awards to go, "You know what, I'm not an

a makeup artist."  So I want that recognition or I want to feel

that celebrity, whatever that word is, to apply to me in a job

that I can go for.

a little short-sided.  I get it.  But I just want my particular

makeup and hair, you know, to be equally rewarded for this --