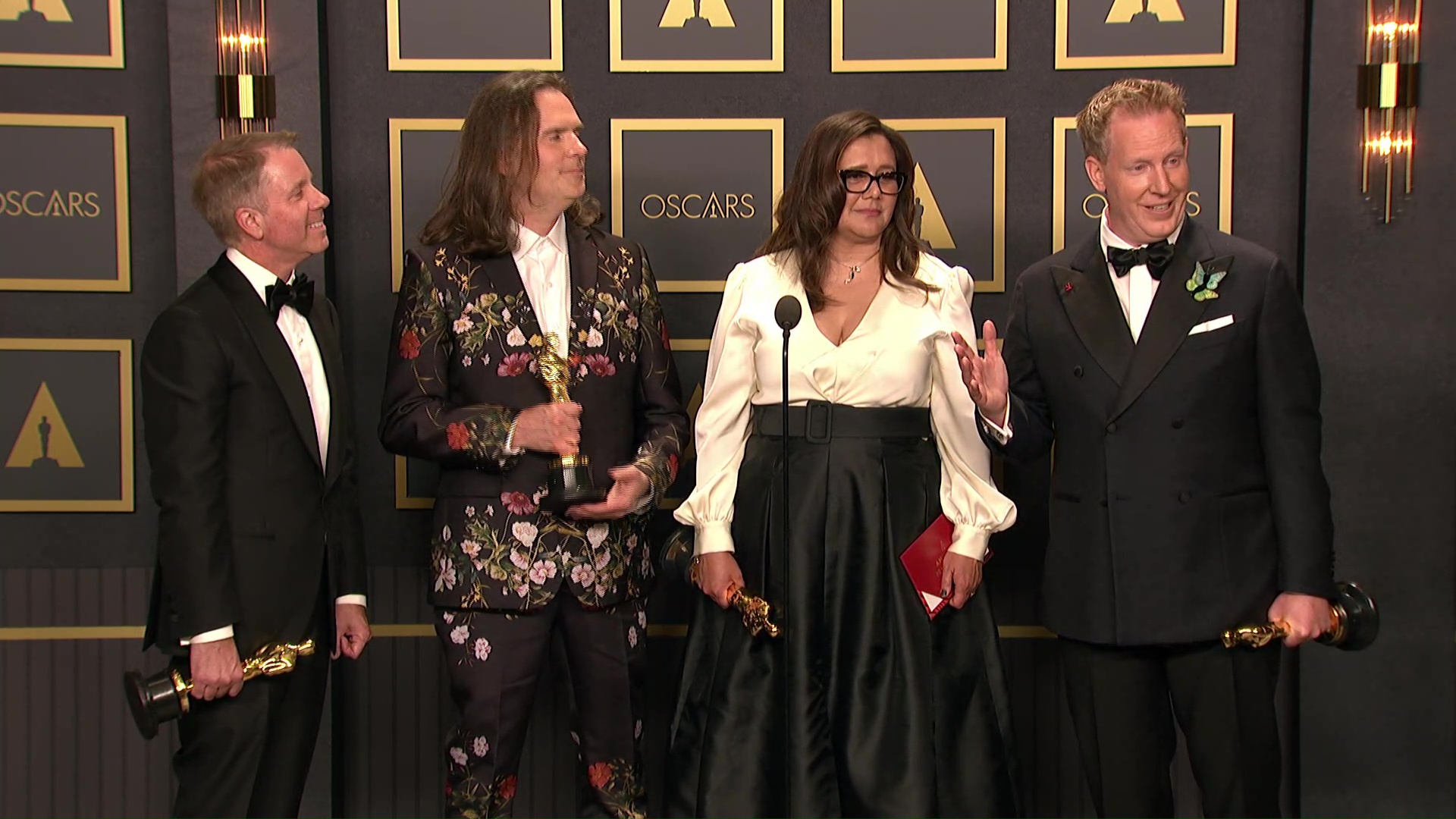 All right.  I'm in the theater when you're

giving your acceptance speech and somehow you

were able to do it in the allotted time going

back and forth.  Was that rehearsed or was

that just all natural?  It was great?

about how all four of us could say something.

it would be weird if we didn't do that.  And

then it was just pure adrenaline and fear.  I

don't quite remember what I said, so I'll

have to watch it later.

Nice to meet you guys and see you.  I'm a

huge fan of ENCANTO and everything about it.

I was just curious because it is so big on

it resonates with so many people of different

age groups, like, you know, from the ages of

What do you think about ENCANTO -- what do

you think it is about ENCANTO that just,

(Jared Bush)  It is a movie about family.

And I think that the fact that the ensemble

this incredible family fun energy.  And I

think, for me, I need stuff to lift me up

after these past two years.  It was amazing

to see that on social media.  It was pretty

I have to ask the music question.  Forgive

the song.  Can you tell me if you knew that

was happening, how that came to be, and what

you thought of it?

(Byron Howard) I mean, it is amazing.  They

kept a lot of secrets from us.  We knew that

there was going to be some version of Bruno

tonight, but it was going to be something

unexpected and fun.  I absolutely loved it,

were just talking about, different people

have found their way into the story and into

their own take. So seeing Megan Thee

Stallion do it is mind-blowing.

This question is for Yvette.  Yeah.  It's

because she is a Latina one.  And I see this

Mexican Americans.  Can you talk a little bit

about that.  People from different countries

working on the same project that is talking

important was for these guys to have you,

included there, because you know, you

you know, a statement on how getting more

diverse voices in the room and making sure we

had an amazing Columbian cultural trust that

we worked with and people from Columbia that

were experts in all different kind of things.

And we had our Familia group, which is a

group of Latino artists and engineers and

production people.  And really it was about

the group of Familia, the Familia Group.

The group of Familia inside Disney?

But, really, I think it's a statement of

what, you know -- what can happen when you

have diverse voices in the room.

Well, we have already heard that Deaf West

is going to be adapting CODA.  And of course

having worked with Lin-Manuel Miranda, I have

to ask if you or the team have even had early

talks about turning ENCANTO into a stage

(Byron Howard) The president of the studio

can talk about that.

that conversation, but to your point, you

look at this film and you look at the eight

wrote and you look at the stories that Jared

and Charice created and the film that we

ultimately all came together to make, and it

you make these movies and you hope they go in

the world and you hope people find them and

that they see themselves in them, but then to

have it be such a phenomenon is beyond any

What do you want to say to the Latin

community because we aren't always

represented properly and with love.  And this

movie did such a great job in showing the

diversity that is in our community and the

what, what I want to say is that we belong

here in Hollywood.  We belong.  Our stories

are important.  We belong up front.  We

belong in the center.  And there's so many

amazing stories within our community that we

kinds of artists to tell our stories.  So get

working.  We need you.

Hey, there.  Congratulations, everybody.

(Yvett Merino) Thank you so much.

had a package before the show where he

specifically talked about the character

designs and just how people can see

themselves and, you know, a heroine wearing

glasses.  All these kinds of things.

Can you talk a little bit about how those

came to be because the character design, so

many people can see themselves in these

(Byron Howard) I can say huge credit to

Charice Castro Smith, our co-director and

Early on we really started thinking about

these characters as family architects that we

would all relate to.  A lot of us have a

black sheep of the family or the golden child

or a mother who heals us with food.  And so

it really is an amazing collaboration, I

think between story.  Lin, who also was

writing songs to help us understand those

characters and our amazing character

designers and animators who brought those

characters to life.  We really wanted all of

them to feel like real people that would be

in your families or your friends or

yourselves.  And I am just amazed at what the

team was able to accomplish.

Hello.  Congratulations for your win.

Obviously, one of the biggest achievements of

this movie is representation.

So what advice do you have for us aspiring

creators who want to continue to train with

diversity in their project?

(Yvett Merino) You know, I would just say

continue to do it.  Again, our stories are so

important.  There's so many more stories than

what have been told and stories that for a

long time have been ignored because people

see a certain community one way, and they

want to portray them only that way in films

and in stories.  And so continue to write the

there.  It is important.  We need to see it.

Our kids need to see stories from our

(Byron Howard) we need your voices

This movie has taken off like crazy.  So I

would love to know how you feel about it

being the subject on social media, reels,

TikTok, all over the place.

(Jared Bush) Well, it's an amazing

experience.  We work on these movies for

about five years.  So this is the end of a

long journey for us.  And to see that much

great energy surfacing around the movie and

how enthusiastic people are, people making

costumes and doing the dances and the

families watching it over and over again.  It

has been an extraordinary couple months for

us.  So we are very grateful to everyone who

has put any of their love and appreciation

into the movie.  That's very special to us.

Thank you very much.