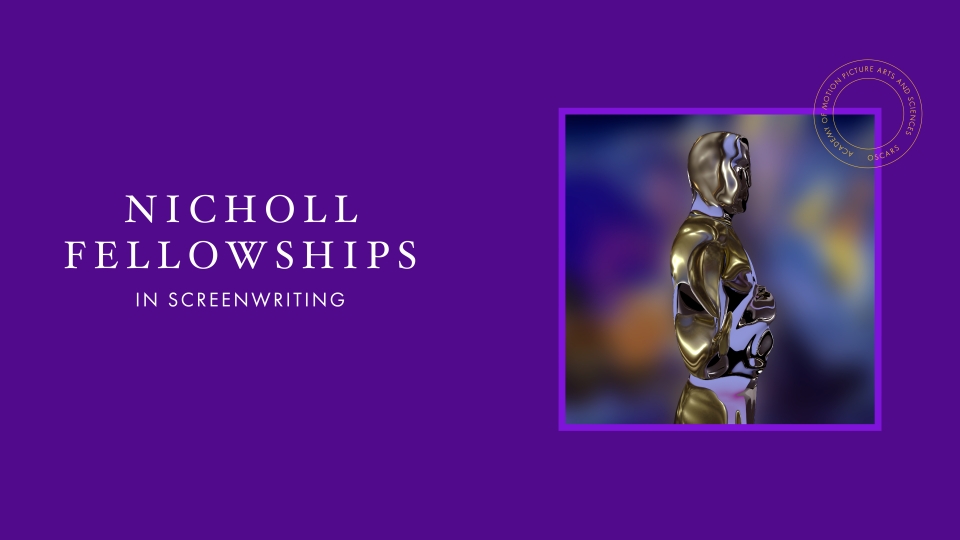 Scripts to be performed at live read in November

Four individuals and one writing team have been selected as winners of the 2022 Academy Nicholl Fellowships in Screenwriting.  Each individual and writing team will receive a $35,000 prize and mentorship from an Academy member throughout their fellowship year.  They also will be featured at the Academy Nicholl Fellowships in Screenwriting Awards and Live Read on November 9 at the Academy Museum of Motion Pictures, where an ensemble of actors will read selected scenes from the winning scripts.  The Nicholl Fellowships was established in 1985 through the support of Gee Nicholl in memory of her husband Don Nicholl.

The 2022 winners are (listed alphabetically by author):

Jennifer Archer (Springwater, Ontario, Canada), “Into the Deep Blue”
Nick Bennet is rebuilding his life after the death of his mom, a DUI, and mandatory grief counseling.  Together with Fiona, his fiery best friend from therapy, they navigate the waters of grief and their growing feelings.

Callie Bloem and Christopher Ewing (Los Angeles, CA), “Tape 22”
A music journalist reeling from the death of his wife discovers a mixtape that brings her back to life for four minutes and 23 seconds a day, exactly the length of her favorite song.  Now he’s determined to bring her back for good even if he might accidentally open a black hole in the middle of L.A.

J.M. Levine (La Crescenta, CA), “Operation Gemini”
After being separated from her newborn twins during the invasion of Kyiv, a mother recruits two civilians to drive her back into war-torn Ukraine to rescue her children before medical supplies run out and the Russian army takes over.  Inspired by a true story.

Timothy Ware-Hill (Orange, NJ), “Tyrone and the Looking Glass”
In Birmingham, AL, 1963, during the height of the Civil Rights Movement, a Negro boy goes on a quest to find the four magical treasures he needs to wield the Looking Glass – the only weapon powerful enough to defeat a three-headed dragon that seeks to destroy him and his loved ones.

A total of 5,526 scripts, from 85 countries, were submitted for this year’s competition.  The first and quarterfinal rounds were judged by industry professionals, including graduates of the Academy’s Diverse Reader Training Workshop, a free referral-only program established to train individuals from underrepresented communities to be story analysts.  The semifinal round was judged by Academy members across the spectrum of the motion picture industry.  Eleven individual screenwriters were selected as finalists.  Their scripts were then read and judged by the Academy Nicholl Fellowships Committee, who ultimately voted the winners.

The 2022 finalists are (listed alphabetically by author):

The five fellowships are awarded with the understanding that recipients will complete feature-length screenplays during their fellowship year.  The Academy acquires no rights to the works of Nicholl fellows and does not involve itself commercially in any way with their completed scripts.

The 2022 Nicholl Fellowships in Screenwriting Awards and Live Read at the Academy Museum on November 9 is free and open to the public, but advance tickets are required.  Tickets may be obtained online here starting today.  The Academy Museum is located at 6067 Wilshire Boulevard.

The global competition, which aims to identify and encourage talented new screenwriters, has awarded 176 fellowships since it began in 1986.  In 2022, several past Nicholl fellows added to their feature film and television credits:

• Nikole Beckwith received a Best Screenplay nomination in the Film Independent Spirit Awards for writing “Together Together,” which she also directed.
• Destin Daniel Cretton, who directed and co-wrote, with fellow Andrew Lanham, “Shang-Chi and the Legend of the Ten Rings,” recently signed on to direct Marvel Studios’ “Avengers: The Kang Dynasty.”  Cretton is an executive producer on the HBO Max series “Tokyo Vice.”
• Jacob Estes wrote and directed XYZ Films’ “He’s Watching.”
• Susannah Grant, who was the showrunner on the Netflix miniseries “Unbelievable,” is writing and directing “Lonely Planet” for Netflix.
• John Griffin is the creator of and a writer on the Epix series “From.”
• Terri Edda Miller made Variety’s Women’s Impact Report 2021 for her work as co-showrunner on CBS’s “The Equalizer” with fellow Andrew W. Marlowe.
• Annmarie Morais is co-creator, co-showrunner and a writer on the CBC and BET+ series “The Porter.”
• Ehren Kruger co-wrote Paramount Pictures’ “Top Gun: Maverick.”
• Geeta Malik wrote and directed “India Sweets and Spices,” adapted from her Nicholl-winning script “Dinner with Friends.”  She was selected for the Warner Bros. Television Directors’ Workshop this year.
• Burlee Vang and Abel Vang co-wrote and co-directed “They Live in the Grey.”

For more information about the Academy Nicholl Fellowships in Screenwriting, visit oscars.org/nicholl.